A Centennial Retrospective with photographs by André Kertész 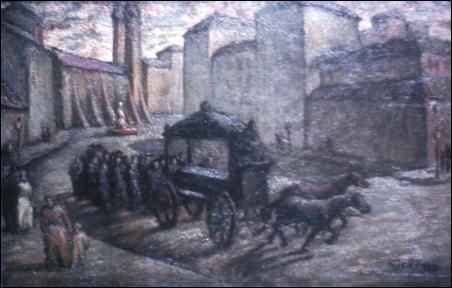 Madelyn Jordon Fine Art is pleased to present the first retrospective exhibition of the work of the Hungarian-American avant-garde painter, Theodore Fried. The exhibition, organized in celebration of the 100th anniversary of the artist’s birth, with the assistance of the Fried estate, includes major paintings and works on paper from every phase of Fried’s long career, both in Europe and America. It follows a highly successful exhibition of Fried’s European period at the Corcoran Gallery of Art in 2001. In addition, the exhibition will include works from the Fried collection of his close personal friend, famed photographer Andre Kertesz. The photographs, taken over a period of years, provide an insight into the close bond that existed between the two artists, professionally and personally. Sharing a common heritage, language and time in history they influenced each other throughout their lives and artistic careers.

Fried’s story speaks of an artistic life bound up with the political and historical events of the 20th century. Born in Budapest, Hungary in 1902 to a comfortable middle-class family, Fried was educated at the Royal Academy on Fine Arts in Budapest. Rebelling against the academic style taught at the academy, and faced with a bleak political situation for Jewish artists, Fried left Hungary in 1923. After a brief period in Vienna in 1924, where he exhibited paintings based upon his father’s death, he arrived in Paris in 1925. There he met Kertesz, a fellow Hungarian, and the two artists became close friends, joining the artistic community living and working in the Monmartre section of Paris. Fried made his home in Paris from 1925-1940 gaining significant recognition for his sophisticated figurative paintings, which combined ideas taken from cubist, expressionist and fauvist movements. By 1930 he had begun to establish an international reputation, exhibiting in Vienna alongside Pablo Picasso, Emil Nolde, Oskar Kokoscka, Wassily Kandinsky and Edvard Munch. Throughout the 1930’s Fried’s reputation and work gained in stature, but by 1938, the situation in Paris was growing intolerable for Jews. In 1940 Fried, branded a degenerate artist by the Nazis, fled Paris, hiding in Toulouse until he could find a way to escape France. Finally, in 1972 he was granted a special visa, through the Quaker Relief Organization to come to the United States.

Arriving in America with nothing, Fried started over. Working from his studio in Westbeth, in Greenwich Village, he continued to paint figuratively, in vivid colors, harmonious, intricate compositions in a variety of subjects, from still life to landscape. He and his wife, Maria, established an art school at the Hudson Guild settlement house where they taught for over twenty years. He also became an active member of the Federation of Modern Painters and Sculptors. In 1979, one year before his death, Fried painted “The Bicyclists” an ode to New York City and the life he established in America. His passion for painting had sustained him throughout the tumultuous events of his life.

The bulk of Fried’s early works were recovered in 1979, one year before his death in 1980. A group of these paintings were shown at the Corcoran Gallery of Art in Washington, DC in 2001. This is the first New York exhibition of Fried’s work in over 10 years.