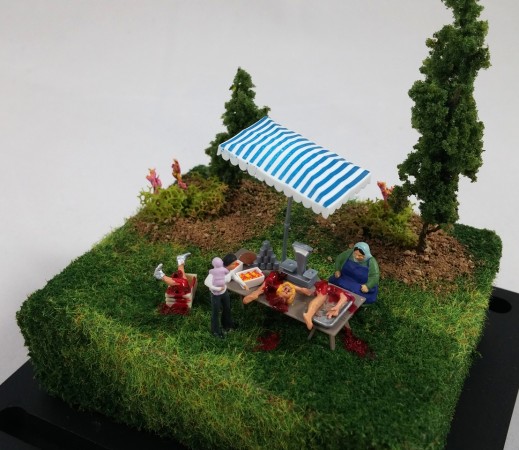 NPR Interview: These Dioramas Are To Die For
La Times: Miniature Crime Scenes Are Killing It
Huffington Post: Dieoramas Will Warm Your Heart and Freak You Out
Las Vegas Weekly: Murder She Built
Scarsdale Inquirer: Artists Finds Die-hard Fans...

Madelyn Jordon Fine Art is pleased to present ABIGAIL GOLDMAN: Oh So Sorry, Las Vegas artist Abigail Goldman’s first solo exhibition in New York, from December 12 through January 24, 2015. The exhibition will consist of fifteen dieoramas, created in the past year.  The opening reception will be held Friday, December 12, 6-8 pm.  The artist will be present and the public is invited.  Previews and private showings are by appointment only.

Abigail Goldman creates meticulous, disarming sculptures, befittingly dubbed, dieoramas—gruesomely detailed, miniature scenes of mayhem and murder—using various media such as styrofoam, synthetic grass, figures from model train kits, and vivid red paint—(Ahem, for fake blood).  In her tiny dramas, Goldman artistically directs still moments at the peak of a dark event.  Her inspiration is innate, albeit her personality is far from being dark or melancholy.

In Sunday, Goldman carefully orchestrates the placement of what appears at first to be an ordinary afternoon in rural America, replete with everyday gardening tools set amongst a grey house and verdant trees.  But, upon careful inspection, we see two tiny men (one in suspenders and the other wearing a fisherman’s cap) with a lumberjack saw, slicing a woman in half in order to bury her in the open grave behind them.  The beat-up car in the driveway and overall scene is not at all tantamount to a happy tale in a story book, but rather depicts a cover-up of a murder.

When gazing upon each of the artist’s delicate constructions, the viewer witnesses similarly creepy scenes to that of Sunday.  Approximately eighty seven times smaller than real life, Goldman’s works are tiny enough to be charming at first sight so that the gore is not the first thing one sees.  When the ah-ha moment comes, the shock evokes a range of reactions.

Goldman’s admirers have asked her to emulate scenes from films, namely those of Hitchcock, as well as the wood chipper scene from the movie, Fargo, but Goldman choses to make her own instead.

All of the allegorical dieoramas in this exhibition are fueled by Goldman’s fascination with crime, which dates back to her childhood in Marin County, California, where she collected crime scene photography and made quilts featuring death row inmates.  After college at Sarah Lawrence in New York, she landed a job as a crime reporter at the Las Vegas Sun, covering crime and the courts from 2004-2010.  Since 2010, she works as an appeals investigator for the Federal Public Defender of Nevada.

This is the artist’s first exhibition in New York.  Her work has been reviewed by several publications, including NPR (feature story interview), the LA Times, Huffington Post and Las Vegas Weekly. Her artworks are in various collections, worldwide.