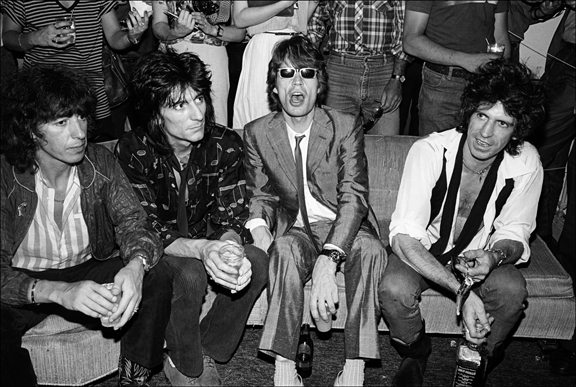 We are pleased to announce GRIT AND GLAMOUR: The Photographs of ALLAN TANNENBAUM, a solo exhibition of photographs by New York artist, Allan Tannenbaum.  This exhibition will run from June 15 - August 5, 2017, with an opening reception on Thursday, June 15, 2017 from 6:00 - 8:00 p.m.  The public is welcome.

This exhibition features a dazzling group of photographs taken by renowned artist, Allan Tannenbaum during his tenure in New York City at SoHo Weekly News from 1973 to 1982. As the Chief Photographer and Photo Editor of the newspaper, he was on the scene covering the Big Apple’s riotous nightlife at iconic discotheques, concerts, and bars where fashion elites, celebrities, rock musicians, artists, and hipsters convened.  The gritty, decaying street scene in New York was the playground for luminaries like Debbie Harry, The Cure, Jack Nicholson, Bob Marley and Bruce Springsteen.

Shooting in predominantly black and white film, Tannenbaum’s photography offers a trip down memory lane into a unique and ebullient era.  Chronicling a pivotal yet rocky period in New York City’s evolution, Tannenbaum’s lens provides a historical view on the people who revolutionized New York City.  From photographing Arena rock stars such as the Rolling Stones, celebrated prominent figures like Muhammad Ali, and emerging punk musicians such as Patti Smith, Tannenbaum captured a time where the city was bursting with creativity and verve in spite of the hardships and political issues of the time.

The images included in this exhibition reflect the ease and comfortability between Tannenbaum and his subjects. One candid photographic example is of James Brown gleefully jumping in the middle of the street, with his right hand waving in the air. A similar moment of playful humor is of Steve Martin pretending astonishment at being filmed. Tannenbaum also unobtrusively captures the intimate moments between stars such as the backstage embrace between Dolly Parton and Mick Jagger. Through his work, Tannenbaum developed a friendship with Yoko Ono leading to an exclusive opportunity of photographing both Lennon and Ono during the filming of the video, “Starting Over,” a few weeks before Lennon’s tragic and untimely death.

Many of these photographs are presented in Tannenbaum’s newly published book, Grit and Glamour: The Street Style, High Fashion, and Legendary Music of the 1970’s.  A book signing and artist talk with Tannenbaum will be held during the course of the show.  Each section of the book focuses on a different aspect of the decade—from nightlife, fashion, and street scene to arts and entertainment and music, accompanied by insightful commentary and revealing anecdotes.

Allan Tannenbaum's career in photography spans more than four decades.  Born in Passaic, New Jersey, in 1945, he received a B.A. in Art from Rutgers University in 1967, where he photographed for The Targum – the campus newspaper – and made films for his art courses.  Gravitating to the nascent art scene in the SoHo district of Manhattan in 1972, Tannenbaum worked as a taxi driver and bartender while looking for work as a photographer. In 1973, when the SoHo Weekly News commenced publication, Tannenbaum became the Photo Editor and Chief Photographer.  The newspaper started out as an eight-page free paper, but soon became a popular newsstand seller that rivaled the established Village Voice. Tannenbaum relentlessly covered the art world, music scene, politics, show business, and nightlife until 1982 when the SoHo News folded.

Tannenbaum has also done documentary and feature photography in places like Thailand, Indonesia, Palau, Jordan, Bahrain, Mozambique, Zimbabwe, Namibia, Brazil, Israel, Iceland, and Mexico. He has covered numerous political campaigns, nominating conventions and news stories in the U.S. such as the Oklahoma City bombing and the Columbine massacre.  His work has appeared in many photo books and exhibitions, as well as appearing regularly in NEWSWEEK, TIME, LIFE, ROLLING STONE, PARIS MATCH, and STERN.  His photographs have graced the covers of TIME three times, and NEWSWEEK five times.  He now works as an international photojournalist contributing to various noted publications including Time, Life, and Newsweek. He is the author of three books of his photography, including New York in the 70s (Feierabend, 2003), New York (Feierabend, 2004), and John and Yoko: A New York Love Story (Insight Editions, 2007).