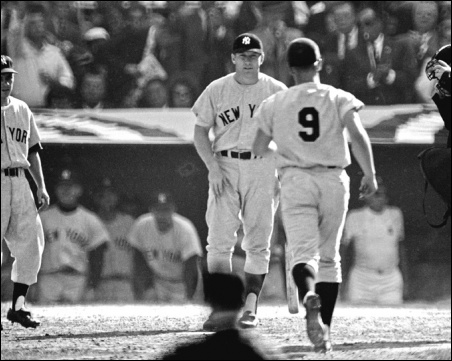 Madelyn Jordon Fine Art is delighted to present a solo exhibition of vintage black and white iconic sports photographs by the esteemed artist Arthur Rickerby, entitled 61*: Mantle and Maris Chase the Babe from August 7 – September 27, 2008. An opening reception of peanuts and lager will be held Thursday, August 7, 2008 from 6-8PM. Previews and private showings are by appointment only.

This exhibition presents 35 never before seen vintage photographs by former LIFE photographer Arthur Rickerby, as he covered the most thrilling home run chase in baseball history, and one that defined the 1961 major-league baseball season. This marks the first time these iconic photographs have been exhibited together and been offered for sale. Rickerby was there to photograph Yankee veteran Mickey Mantle and the talented newcomer, Roger Maris, dubbed by sportswriters as the M&M Boys, as they vied against each other to break Babe Ruth’s single season home run record of 61. Adding to the drama, Baseball expanded the season from 154 games – the standard when the Babe set the record in 1927 - to 162. While Maris hit his 61st home run in the final game of the season, the record books reflect Maris’ victory as “61*” since he broke Ruth’s record, but only in the newly expanded season.

Rickerby’s skilled eye captured not only public moments, but intimate ones – Mantle and Maris up-at-bat with the crowd glued to the action, pensive moments in the dugout, and celebration in the locker room. While the majority of the exhibition’s photographs are of Mantle and Maris, other 1961 Yankee notables are featured as well, such as Yogi Berra, Elston Howard, and Ralph Houk. Mantle and Maris were in good company. On many counts it is believed that the 1961 Yankees were one of the most successful teams in baseball history.

Long the most popular sport in the United States, baseball has been affectionately referred to as our “national pastime” since the 19th century. For lovers of suspenseful competition, baseball, or photography, this exhibition is not to be missed.

While only living to age 51, Arthur Rickerby had an accomplished career. He paid his way through Duke by covering sports for local papers, During WWII, he joined the U.S. navy, serving in the elite photographic unit headed by then Captain Edward Steichen. Rickerby covered a wide range of assignments - Olympics in Berlin, signing of the World War II Peace Agreement on board the U.S.S. Missouri, Jimmy Hoffa trial, and John F. Kennedy's White House and ill-fated day in Dallas. Former Acme Photos (eventually United Press International) and LIFE magazine photographer, Arthur Rickerby captured the world through his lens and is perhaps best remembered for his mastery of sports photography.
Tuesday - Saturday, 10:30 a.m. - 5:30 p.m.