David Ryan: Beyond the Veil... 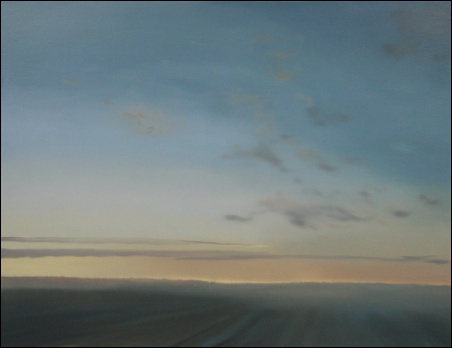 David Ryan: Beyond the Veil

Madelyn Jordon Fine Art is pleased to present a first solo exhibition of paintings and works on paper by David Ryan, entitled "Beyond the Veil", from November 12th thru December 31, 2010. An opening reception will be held Friday, November 12, 2010 from 6-8PM. The artist will be present and the public is invited. Previews and private showings are by appointment only.

The exhibition includes over 20 works-- deceptively simple, unpeopled landscape paintings of the Catskills. Engaged by the atmospheric effects of light and its interaction with the landscape from the unique vantage point of his hilltop home, Ryan skillfully explores the perception of reality in his oil paintings and works on paper. His luminous works possess a cinematic quality - not merely photographic depictions of nature, but idealized atmospheric scenes enveloped in fog and shifting light that suggest a transcendent otherworldliness. A deeper narrative unfolds beyond the surface scene, calling into question notions of reality, perfection, and nature as we know it or wish it to be.

Ryan's works might by considered to be romantic in character...but it's a romanticism that hides inside tones of sensuality, like a celebration of the untouchable. At its core is a fête of the idyllic - nature inviting one to feel its peaceful, earthy character. Ryan's paintings capture nature at its most appealing - the vulnerable moments of dusk's closure and dawn's hopefulness. The images hold the promise of transformation, but it is the viewer, reflecting on their own circumstances, who ultimately holds the key to their deeper meaning.

Ryan's imagery is synthesized from direct observation, over many hours, with additional imagery from film, dreams, experience, imagination, and memory. Ultimately, the constructed scene seeks to connect fantasy with reality. He keeps a certain distance from his chosen landscape, but it is exactly this distance that lets him get intimate, get into the core.

The final result is paintings that exist in the space between the ideal and the real. In a world of harshness and everyday incivility, nature stands as a metaphor for beauty and perfection. The viewer can either experience these works as a lament for a paradise lost or as a parallel world, safe from harm and full of possibility. The choice is theirs.

Catskills artist David Ryan attended the School of Visual Arts in New York City has been creating artwork and exploring different media for over twenty years. In 1991 Ryan produced a body of wax sculpture which addressed the frailty, simplicity and flawed promise of perfection. In 1997, inspired by pre-dawn light on Eastern Long Island, Ryan returned to painting in oil. Recent exhibitions include The Fireplace Project, East Hampton, Enderlin Gallery, Roxbury and Treadwell Museum of Fine Arts.