DIANE GREEN: THE SPACE BETWEEN 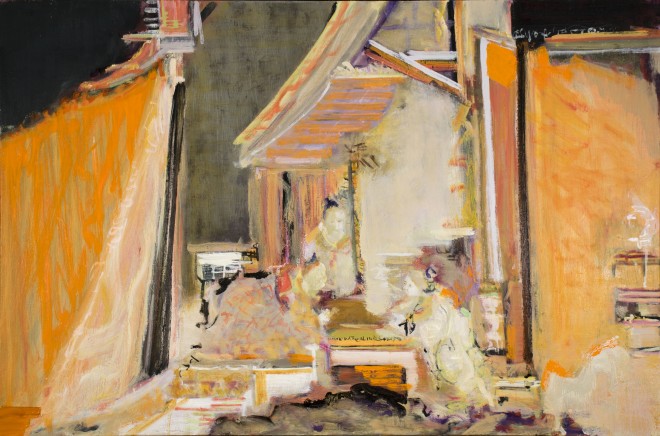 Madelyn Jordon Fine Art is pleased to announce THE SPACE BETWEEN, a solo exhibition of paintings by Manhattan based artist, Diane Green.  The solo exhibition highlights Green’s most recent paintings from 2010-2015.  THE SPACE BETWEEN will be the artists’ first solo exhibition in New York in fifteen years.  The opening reception will take place on Friday Nov. 6, from 6-8 PM and the public is invited.  On Nov. 22 we will host a Q&A with the artist and art historian, Dr. Beth S. Gersh-Nesic from 12:00-2:00 pm.

The 18 paintings in the exhibition present a series of abstracted, intimate scenes of subtle figuration.  Green’s paintings include 1-3 figures interacting in interior environments— traditional subjects of oil painting and portraiture.  According to the artist, the compositions are often loosely autobiographical, based upon personal relationships and events.  Drawing on her deep knowledge and interest in Eastern and Western art history, the figures, often clothed in elaborate, period costumes, are placed in exotic, foreign environments, possibly a palace or boudoir.

Despite the historical references, the curiously-sensuous spaces are refreshingly contemporary and dynamic, since they are part reference-based and part autobiographical.  The compositions combine elements of drawing with abstract painting, feature wide swaths of empty space, loose and gestural strokes, obscuring easy interpretation of the scene.  This culmination of interests lures the viewer to the space between both in a physical and psychological sense. In a way we are gifted space that peaks the imagination and forces us to write our own narrative.

As depicted in Sea Which 3 and Sea Which 7, the subjects are costumed in both colonial and eastern attire; take note of the head pieces and the subtle details found in the kimono and robes, not to mention the rare details of the faces.  The painting, Blue Work is more utilitarian than the others, presenting figures hunched over in obvious modes of making—working together yet positioned apart, a reference to the space between.

Green purposefully obscured her surface even further in the 42 x 54 inch painting entitled, Now; however, she salvaged the composition of the private-quarters with pops of neon so that the spectator does not lose interest.  Similar to Now, the painting, Held, sheds an absolute, couples-vibe.  It is an uplifting painting that ensues an after-glow of a fond intimacy between a couple.  12 out of 18 of Green’s works express a feeling of intimacy;  either a pair or multiple persons are shown engaging with the other in a statuesque, semi-action demeanor due to the way Green omits literal elements.

In this exhibition it is important to touch upon the notion of the artist’s palette; Green’s is in fact extraordinarily-inventive in these new paintings.  In Green’s early career, she worked in highly textural, abstract discourses; her painting surfaces were once described by Raphael Rubinstein as, geological, jewel like encrustations that suggest centuries of organic process.  The use of thinly applied, hyper-color juxtaposed with blanket-muted tones is unlike the thick, textural colors used on her paintings in the late 1980’s and early 1990’s. The colors today are more mature and evenly keeled, a befitting mixture of quiet and loud.

Green’s work is counterpart to fellow contemporary female painters birthing from the 1980’s and 1990’s in the US, such as Amy Sillman, and Jane Irish.  Like Sillman, she paints with confident strokes, leaving implicit marks of blanket spaces for the viewer to ponder over.  Similar to Irish, Green is a self-described painter and student of history.  In using faint, figurative imagery to explore the concept of social interactions, the aim for this curated exhibition is for the viewer to be entertained and mesmerized by Green’s masterful chess playing and the pregnant pauses it provides.

Diane Green was born in Boston, MA, and lives and works in New York City.  She holds degrees from Yale University and Bennington College.  Green was active in the New York gallery scene of the 1980’s – 2000.  Her work has been reviewed by art critic Robert C. Morgan, Ken Johnson of The New York Times, and Raphael Rubinstein of Art and America.  Her upcoming solo exhibition, The Space Between, will be Green's first solo exhibition in New York in fifteen years.