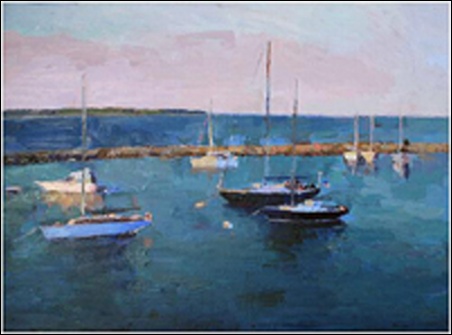 Madelyn Jordon Fine Art is pleased to present a solo exhibition of new works by renowned Westchester artist, Larry Horowitz, entitled, “REFLECTIVE MOMENTS”. The exhibition shall open on Thursday, March 29 and remain on view through May 5, 2007. An opening reception for the artist will be held on Thursday, March 29, 2007 from 6 - 8 p.m. Previews and private showings are by appointment only. (Jordon is exhibiting Lawrence Kelsey from February 2, 2007 to March 24, 2007.)

The present collection is composed of 15 paintings and works on paper that vary in theme from the deeply romantic to the deeply reflective. The artist, a revered landscape painter working in the Plein Air tradition, travels extensively throughout America seduced by nature’s bounty. His favorite locations, the New England coastline, the dense forests and farms of the Hudson Valley, are fodder for intimate paintings which represent color and light reflected through the atmosphere at different times of day, through different seasons, from clear skies to inclement weather. There are deep forest scenes, harbor views in Cape Cod and sunsets. Each work conveys different but powerful feelings while all are commonly bonded in the serenity they infer.
Horowitz’s works reflect a careful attention to traditional methods and materials. While his works reflect a respect for the Hudson River School painters in the application of paint, thickly-painted impasto, palette knife carved surfaces, Horowitz’s colors are totally contemporary.

A passionate painter, Horowitz has been painting or drawing everyday since he was a young boy. His precocious early display of talent brought him to the attention of Maxim Bugzester, one of George Braque’s only pupils. As a grandson of analytical cubism, Horowitz learned to create space in his paintings with overlapping shapes of color, the push-pull technique that is the basis for much modern abstraction.
Upon earning a BFA from State University of New York, Purchase College, Horowitz immediately won the prestigious and coveted position as apprentice to American master, Wolf Kahn. Kahn, perhaps the best known and most significant landscape painter of the latter 20th century trained and guided Horowitz for six years. Horowitz learned to walk the thin line between realism and abstraction, and to appreciate, and in many cases fabricate by hand, the immense variety of interesting materials available to the professional artist. Horowitz to this day makes his own pastels and etchings.

Since setting up his own studio outside of New York City, Larry Horowitz has been a quiet, unmistakable success. His work is included in numerous public and private collections, including the United States Embassies in Finland and Russia.