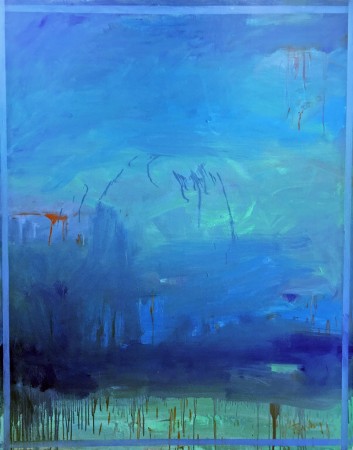 This exhibition debuts Linda Touby’s latest series of paintings, entitled Je T’aime, “I Love You” in French. Never before exhibited, these deeply evocative works mark an abrupt shift in Touby’s artistic expression, whose visual vocabulary, primarily grounded in tenets of 20th century abstraction, has evolved subtly and continually over a 30+ year career. Previously, Touby’s paintings have been inspired by giants of art history, from Giotto to Picasso, and more recently, the sculptor, and writer Sidney Geist, a personal friend. Je T’aime has erupted from a source much closer to home, and expresses pure emotion, not intellectual interpretation.

The drama and intensity of Je T’aime’s works flow from Touby’s intense love for long time husband and partner, Basil Gogos, who passed away last year. Gogos (the legendary “monster” artist whose fans and collectors include Johnny Depp, Nicolas Cage, and other Hollywood luminaries) was Touby’s life partner, both in love and art. For Touby, her deepest feelings, expressed on canvas, are a celebration of love and an outlet for personal grief. Tapping into personal torment and feelings through her art, Touby deviated from previous works of neatly aligned, uniform color fields. Instead, allowing her raw emotions to shape the work, these paintings incorporate paint drips, splatters, and gestural marks on transparent fields of colors that bleed into each other, often overlaying one contrasting color over another.

Intuitively applying textural, cumulative layers of brushstrokes on a flat field of color, these compositions stylistically resonate closely to Abstract Expressionism. The floating zones of luminous pigments range from soft pastel hues of blues and pinks to dense colors of crimson reds and Egyptian blues - colors often associated with love. The swaths of color reach out to the very edge of the canvas often encountering the vertical and horizontal striped bands that border many of her paintings, suggesting either that she is not going to let her impassioned states run too far away or that her emotions cannot be bound by any border.

The graduated color fields shaped by layers of meditative, rhythmic, brushstrokes softly blur and fade into each other, providing the work a dimension that suggests, age, depth, and natural light. An illustration of this process can be viewed in the painting entitled Je T’aime 10. Moving from the top to the bottom of the canvas, the broad sweeps of colors in light grey, baby blue, and mustard yellow imbue an atmospheric landscape-like quality unencumbered by any figure, form, or narration. Touby’s handling of paint toward a looser application amplifies the contrast between twilight and dusk. Red blotch marks hug the margins of the top left of the canvas and black solid lines edge the painting, providing structure, a signature motif of Touby. Je T’aime 10 evokes the feeling of a dream state or an impression of a hazy half memory - the essence of something no longer there.

The impetus for this evocative series aligns with Touby’s practice. Her canvases impart a distinct sense of movement and her handling of color seems to develop from the subconscious, enveloping the viewer in an emotional roller coaster in the name of love.

A native of Florida, Linda Touby moved to New York as a teenager and earned her BA at Pratt Institute in Brooklyn. She thereafter attended The Art Student's League studying under the tutelage of renowned painter Richard Pousette-Dart. Touby has been exhibiting her paintings for the past 30 years and has been included in numerous solo and group exhibitions at museums and galleries, both nationally and internationally including the Museum Fur Konkrete Kunst Ingolstadt (1999), Germany, and the US Embassies in Kuwait, Belgrade, Bujumbura Burundi, and Paris. Her paintings have been incorporated in many private and public collections, including General Motors Corporation, Phillips Corporation, Bertholon - Roland Corporation, and the United States State Department in Washington, DC.