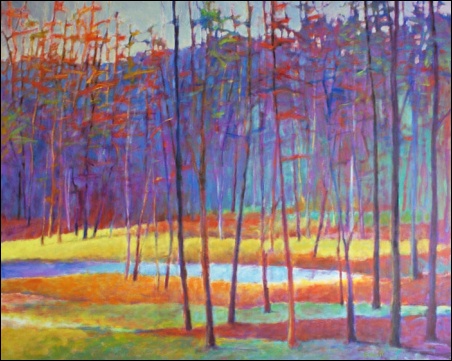 Madelyn Jordon Fine Art is pleased to present a group exhibition of works by fifteen artists, entitled “Summer Session”, from July 29 thru September 18, 2010.  The works on view range from the purely abstract to the figurative – landscapes, waterscapes and floral still lifes, by select contemporary and important 20th century artists.

The show introduces two new artists to the gallery – David Ryan and Dan Gualdoni. Both artists present landscapes with abstracted, moody vistas. Ryan explores the atmospheric effects of light and its interaction with the landscape in his oils. Gualdoni, pulling from his painting and printmaking background, layers lithographic inks and oil paints in his body of work, Coastal Redux, creating atmospheric expanses along the coast.

Important works from gallery artists can also be seen. A highlight of the exhibition is Wosene Worke Kosrof’s painting “House of Words” from 2005 – which features a warm palette, and richly textured surface of inspired symbols of the Amharic script, one of the world’s oldest languages. Wosene’s (his professional name) works are in numerous museum collections and he will have a mid-career retrospective at the National Museum in Ethiopia this October.

Also featured are two thickly brushed, sculptural oil and mixed media paintings by the late abstract artist Stanley Boxer, demonstrating his remarkable manipulation of color and materials. Boxer exhibited widely and had a long, important career, and was the subject of a 50-year traveling retrospective exhibition this past year.  Madelyn Jordon Fine Art represents the Boxer estate.

Works from the secondary market are another highlight of the exhibition and include pieces by Wolf Kahn and Milton Avery. Kahn’s include a 1962 pastel landscape, and a 1993 soft palette beachscape in oil. Both works illustrate Kahn’s signature prowess in fusing his personal vision of nature with color, painterly abstraction, and the atmospheric qualities of American Impressionism. Avery’s oil-on-paper landscape “en grisaille”, a later painting dating from 1962, showcases his powerful play between abstraction and realism. His 1954 woodcut “Hen” illustrates his proclivity to successfully represent common subjects, while minimalizing shapes and details.

The exhibition showcases an exciting variety of works by a select group of accomplished Contemporary and Modern artists, highlighting the broad range of artistic practices and styles shown by the gallery.  We invite you to take a summer respite from the heat