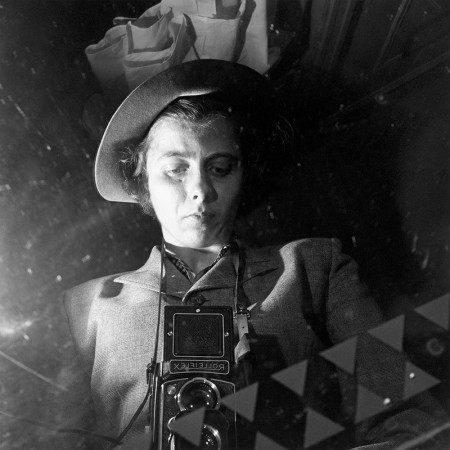 We are delighted to announce VIVIAN MAIER REVEALED: SELECTIONS FROM THE ARCHIVES. This exhibition will be on view from June 14-August 25, 2018, with an opening reception on Thursday, June 14th from 6-8 p.m. The public is welcome to attend.

We will also feature a Gallery Talk led by Madelyn Jordon on Thursday, June 28th from 6-8 p.m. and a free screening of the 2015 Oscar nominated documentary FINDING VIVIAN MAIER on Thursday, July 12th from 7-9 p.m. The public is welcome to attend.

The exhibition features a selection of over 30 black and white photographs by American street photographer Vivian Maier (February 1, 1926 – April 21, 2009).  It is the first exhibition of Maier’s photography in Westchester County. Unknown during her lifetime, Maier worked as a full-time nanny while pursuing her photography consistently over five decades.  Her black and white photographs-mostly from the 50s and 60s-are indelible images of the architecture and street life of Chicago and New York. Always with a Rolleiflex around her neck, she rarely took more than one frame of each image and concentrated on children, women, the elderly, and indigent. She also turned the camera on herself in striking self-portraits.

Vivian Maier’s work came into light in 2007 when amateur historian, John Maloof bought a box of negatives belonging to the photographer at a local Chicago auction house. Maloof became so intrigued with Maier’s work that he began to search out and accumulate more of her work from other buyers at the original auction, amassing a collection of 100,000 to 150,000 negatives, more than 3,000 prints, hundreds of rolls of film, home movies, audio tape interviews, and other miscellaneous items.

In 2013, Maloof and filmmaker Charlie Siskel chronicled her fascinating story in a wildly successful documentary film, “Finding Vivian Maier,” revealing never-before-seen photographs, films, and interviews with many who thought they knew her. The film was nominated for the Academy Award for Documentary Film in 2015 and introduced Vivien’s photographs to the art community and public at large. Through Maloof’s efforts, critics and galleries have now rallied behind Maier’s work, including The New York Times, who recognized her as “one of America’s more insightful street photographers.”

Born on February 1, 1926 in New York City, Vivian Dorothea Maier was an American of French and Austro-Hungarian extraction. In 1956, she settled in Chicago where she was employed as a nanny for more than forty years. Shooting pictures with her children at hand or on her days off, Maier fearlessly hit the bustling streets and actively photographed the city denizens, stashing her unedited images in sleeves and envelopes, boxes and trunks, and then storage facilities. Towards the end of her life, Maier was supported by the children she had cared for in the early 50s. Unbeknownst to them, one of Maier’s storage lockers (containing her massive group of negatives) was auctioned off due to delinquent payments.

With her highly skilled eye and a keen photographic sense, critics have drawn comparisons between her work and that of 20th-century photographers such as Robert Frank, Garry Winogrand, and Diane Arbus. From what we can ascertain from her body of work, Maier’s photographic output was more than a solitary woman interested in just taking pictures but in fact was a powerful vehicle for her to connect with the world around her. Her importance in the history of photography is yet to be determined and continues to intrigue.