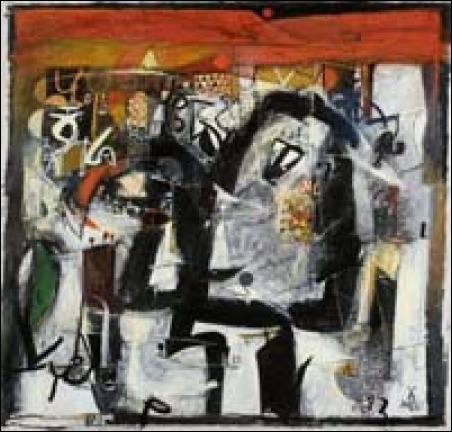 Madelyn Jordon Fine Art is pleased to present its first solo exhibition of paintings by internationally acclaimed contemporary artist, Wosene Worke Kosrof, entitled: Wosene Worke Kosrof : “ Words: From Spoken to Seen”, running from May 11th - June 30, 2007. An opening reception for the artist, featuring live jazz will be held on Fri., May 11, 2007 from 6:30 - 9 p.m., with a gallery talk by the artist at 7 p.m. Previews and private showings are by appointment only.

A studio painter for more than 35 years, Kosrof was academically trained as a fine artist in Ethiopia and the United States and was among the first African contemporary artists to gain critical international attention. Now 100 years since Picasso adopted imagery from African masks to develop modern Western painting, Kosrof has turned another artistic corner combining written letters of the ancient Amharic language of Ethiopia with elements of American-style gestural painting by such New York School artists as Robert Motherwell, and Willem de Kooning.

Kosrof is best known for his ingenious renderings of the Amharic script, one of the world’s oldest languages, and he is the first Ethiopian-born contemporary artist to incorporate these symbols as a root element in fine art paintings. In his color-drenched, densely detailed canvases, the artists elongates, distorts and assembles the symbols into forms that have universal meaning or appeal rather than forming legible words. American jazz
improvisations and 80’s graffiti art are a source of inspiration for the artist and give movement and animation to the canvas while highlighting his masterful use of color.