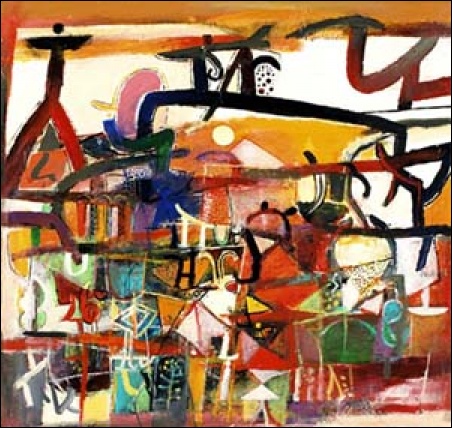 Madelyn Jordon Fine Art is pleased to present a third solo exhibition of new works by internationally acclaimed contemporary artist, Wosene Worke Kosrof entitled Painting Prose from May 10 – June 29, 2013. An opening reception will be held Fri., May 10, 2013 from 6-8PM. The artist will be present and the public is invited. Previews and private showings are by appointment only.

On exhibition will be twelve paintings, created in the last 2 years from the artist’s ongoing “Word Play” series. A studio painter for more than 30 years, Wosene (his professional name) was academically trained in Ethiopia and the United States and was among the first African contemporary artists to gain critical international attention. He is best known for ingenious renderings of the Amharic script, one of the world’s oldest languages, and is the first Ethiopian-born contemporary artist to incorporate these symbols as a root element in fine art paintings. The artist’s inspirations are varied, drawing upon African traditions, personal experience, American jazz, and Western art practices.

Wosene’s canvases are multilayered with paint and imagery, but he is best known for his ingenious use of the Amharic script. The artist elongates, distorts and assembles letters into forms of universal appeal beyond their linguistic meaning as in the painting Life is Good. There is rich dialoguing between the simplified letter forms and symbols that are intensely worked creating color-drenched textured surfaces of visual power.

American jazz improvisations are evident in the active, syncopation of the surface of many Wosene paintings. Here, in the work titled Coltrane’s Notebook, fractured images of jazz instruments, musical notes and strings can be found amongst household objects and figures as well as layers of paint. This painting brings to mind the overall whimsical and joyful compositions of Stuart Davis who was also influenced by jazz.

The work Mother’s Day is an outstanding example of Wosene’s multicolored, lively canvases painted in cerulean blues, sunny yellows, vibrant greens and bursting reds. Busy mother figures emerge amidst swaths of color and pattern. Segments of Amharic script shuffle alongside the figures and the zig-zag patterns of red, white and black reinforce the feeling of movement on the canvas.