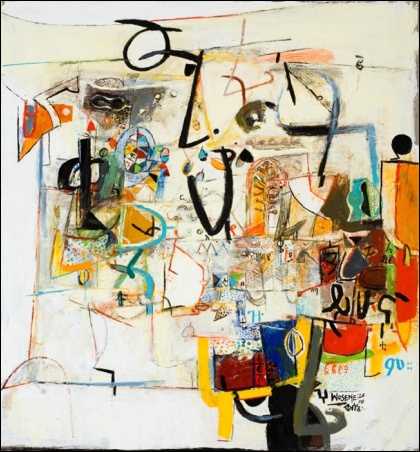 Madelyn Jordon Fine Art is pleased to present “Word Play” a second solo exhibition of recent work by Wosene Worke Kosrof. This exhibition is highly anticipated and coincides with his inclusion in exhibitions at The Newark Museum and The Fowler Museum at UCLA in Los Angeles, which have recently acquired major works by the artist and raised his profile in contemporary art circles. The exhibition shall run from April 10 - May 23, 2009. A reception, featuring live jazz will be held on Fri., April 17, 2009 from 6:30 - 9 p.m. Previews and private showings are by appointment only.

A studio painter for more than 30 years, Wosene (his professional name) was academically trained in Ethiopia and the United States and was among the first African contemporary artists to gain critical international attention. He is best known for ingenious renderings of the Amharic script, one of the world’s oldest languages, and is the first Ethiopian-born contemporary artist to incorporate these symbols as a root element in fine art paintings. In his color-drenched, densely detailed canvases, the artist elongates, distorts and assembles the symbols into forms of universal appeal beyond their linguistic meaning. The artist’s inspirations are varied, drawing upon African traditions, personal experience and Western art practices. American jazz improvisations and 1980’s graffiti art are a source of inspiration and give movement and animation to the canvas while highlighting his masterful use of color. There is a rich dialoguing between the letter forms, symbols and intensely worked, textured surfaces, each image competing for attention within the spatial structure of the composition. At times crowded, at times simplified, Wosene’s current works are grounded in an integration of influences, cultures and themes which resist strict ‘reading’; instead, they offer images of pure visual power which delight the eye, stimulate the senses and invite study.