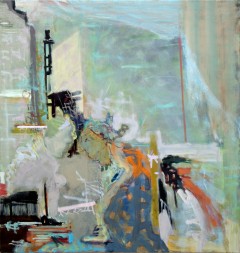 Symphonies of Silence, by Raphael Rubinstein

There is a powerful intimacy in Diane Green’s paintings, which seem to offer us glimpses of lush interiors in which elaborately costumed figures exchange seductive glances and hushed secrets amid scrim-like planes and lacquered furnishings. In the richly textured and subtly radical disjunctions of her paintings she reveals herself as a brilliant inheritor of Vuillard and Bonnard, painters who reveled in the unexplored complexity of domestic spaces. Yet Green’s paintings also convey a sense of a much larger scale that rips through the brocaded and papered walls of these exotically appointed rooms to cast the viewer into another kind of space, one that points in the direction of Clyfford Still and Mark Rothko. This weaving together of different kinds of space and different artistic traditions is part of what makes her work so distinctive. I’ve often been puzzled by the fact that Matisse was a student of Gustave Moreau—how could the epitome of unleashed color and economical paint handling have anything to do with the narrative-heavy Symbolist who handled paint like a goldsmith or jeweler? It’s only when I look at Green’s paintings, with their shimmering color and virtuosic brushwork, that the Moreau-Matisse connection starts to make sense.  When I think about “the spaces between,” I always recall the opening shot in Jean-Luc Godard’s film Pierrot Le Fou, where Jean-Paul Belmondo is sitting in a bathtub reading a passage by art critic Élie Faure about Velázquez. It begins, “After he had reached the age of fifty, Velasquez no longer painted anything concrete and precise. He drifted through the material world, penetrating it, as the air and the dusk. In the shimmering of the shadows, he caught unawares the nuances of color which he transformed into the invisible heart of the symphony of silence. . . . “