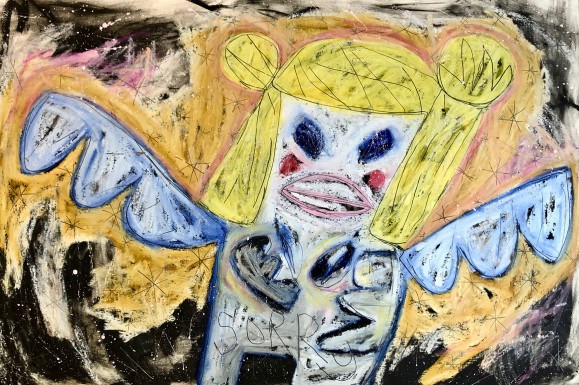 Madelyn Jordon Fine Art is delighted to announce BETWEEN NIGHTMARES AND FAIRY TALES a first ever solo exhibition of works on paper by NY artist, ADAM HANDLER. This is Handler’s second solo exhibition with the gallery and will be on view from July 11 - August 24, 2019, with an opening reception on Thursday, July 11th from 6:00 - 8:00 p.m. The public is welcome to attend and meet the artist.

This exhibition will feature a salon style installation of 33 works on paper, created in the past four years. Handler, who is recognized both internationally and nationally for his whimsical, fantastical imagery and faux-naif art practice, is influenced by Medieval and Renaissance art, Folk and Outsider art, and artists such as De Kooning, Dubuffet, and Basquiat among others. His drawings, from tiny to large scale, represent his love for fairy-tales and the flip side, nightmares. Says Handler, “These two concepts have always been present in my work and probably most evident in my drawings. Some of the characters displayed in “Between Nightmares and Fairy tales” are Red Riding Hood, Spider girls, erotic bunnies, Tulip faces and ghosts with personality. These pieces were also explored in my large-scale canvas works but came into fruition on paper.”

For Handler, working on paper is an essential part of his practice. Paper has a quality that reacts with almost any media in a unique and special way.  Says Handler, “when creating a work on paper/drawing, I work on the floor leaning over the piece; it’s a personal and psychical experience. Within these intimate confines I feel free to experiment with new concepts. Many of the tiny works on display represent a purging of my thoughts, passions, insecurities, nightmares and dreams.”

Incorporating a variety of materials such as acrylic paint, oil stick, pencil, and markers, Handler’s child-like, quirky, drawing technique features flat, outlined characters with little to no depth of field. Often his works are accentuated by a highly worked background of scratches and markings that reach out to the edge of the paper and seem to be vigorously drawn. Handler skillfully manipulates form, surface, and color to evoke an immediate response.

Handler’s evolving cast of characters have a deep connection to his inner self. For instance, ghosts are among his most recognizable motifs, frequently turning up in his paintings. Could these spirits have less to do with hauntings, and instead be a memory or thought that refuses to fade away? Regardless of their origin, Handler is able to deftly deflect his darkest instincts, often instilling humor, optimism, and a lightheartedness to his eccentric creatures.