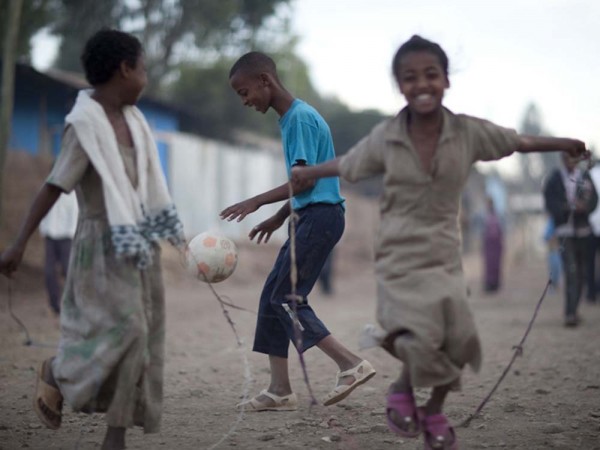 Madelyn Jordon Fine Art is pleased to present a solo exhibition of spellbinding color photographs of Ethiopia by Israeli photojournalist Atalia Katz, entitled “Voice of Ethiopia”, from September 21st thru October 30, 2010. The exhibition, curated by Jennifer Bahng, travels to Westchester from New York City, where it was exhibited to great acclaim in April, 2010 and was featured in Bloomberg, the Jewish Herald, and Bust. An opening reception will be held Tuesday, September 21, 2010 from 6-8PM. The public is invited. Previews and private showings are by appointment only.

Ethiopia is home to historically important communities of Christians, Jews, and Muslims - preservers of ancient ceremonies and traditions within the complex mix of African cultures. The exhibition showcases ancient and modern juxtaposed in peopled scenes of sacred structures, markets, landscapes, and urban settings. In one photograph, a procession of worshippers rims a man-made quarry housing a subterranean church; the roof is shaped as a squared-off cross - an ancient Ethiopian symbol that represents the powerful intersection of heaven and earth. Figures adorned in white robes are contrasted with those wearing contemporary fabrics and footwear. A hunter striding across the desert and women squatting in a field toasting coffee beans conjure up the past, while children jumping rope and young city kids smoking cigarettes feel more present-day.

A primary focus of the exhibition are photographs Katz took over a 2 week period documenting the community of Ethiopian Jews, which many consider to be one of the lost tribes of Israel. The Beta Israel community includes 8,700 people presently waiting in the city of Gondar to emigrate, to join the more than 120,000 Ethiopians already living in Israel. Katz’s photographs of the makeshift, metal-hut synagogues of the transit camps reveal centers of faith and social life.

In honor of Ethiopian Jews, the gallery will offer a limited-edition, The BOX. It includes 14 selected artist-signed photographs, along with the director’s statement, the artist’s statement and biography. The photographs, documenting a morning service, present a moving portrait of this unique community of Jews.

Through Katz’s remarkable photographs, we become more aware of the cultural value of these isolated groups, while recognizing our universal humanity. Katz’s striking portraits transcend ethnographic and anthropological concerns to present a gallery of individuals: community elders with worn, timeless faces, young people with a contemporary edge, and vibrant children. Katz enables us to look into their eyes, to see their expressions, and most importantly to make a connection that transcends distance.

The result is a powerful tableau. While Katz’s photographs stand on their own as works of art, they also open a window into a world rich with contrasts and similarities to our own.

Atalia Katz is a free-lance photojournalist, currently based in New York and Tel Aviv. A graduate of Oranim Art Education Seminary, Katz studied photography at Camera Obscura School of Art in Tel Aviv and at the International Center of Photography in New York City.