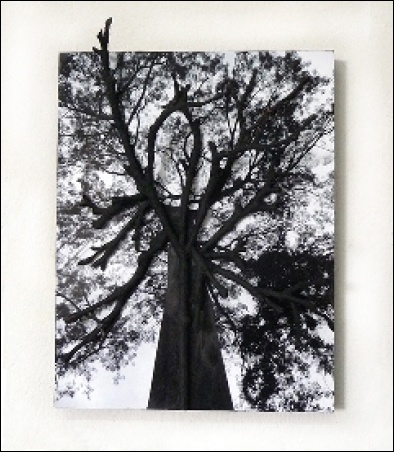 Revisionist Landscapes features small scale, mixed media panels from Korman’s newest body of work created over the last two years. Korman’s works combine photography, painting and sculpture, and explore the intersection of reality and perception in 3-dimensional scenes of forests and treed landscapes. Working with manipulated photographs taken both locally and on trips abroad, and rescued tree branches from the Bronx and Westchester, Korman’s stark landscapes are simultaneously photorealistic and impressionist assemblage, operating in an indeterminate space between the two.

The act of seeing what is directly in front of us is challenged by the flattened, monochrome images of the background scene, which subtly abstract the reality in somber shades of gray. The addition of blackened, stripped tree branches to the surface act as a sculptural, painted element to the works, and create illusive spaces to enter the scenes. Memories, both the artist's and the viewer's, hum under the surface of these works, creating a passage for interpretation and to be mentally transported.

These works are Korman’s response to the recent devastation of storm-felled trees occurring near her studio and home in the Bronx in the past 4 years. Bearing witness to the denuding of the forest and vast numbers of downed branches of the storms’ aftermath, Korman, an avid naturalist and environmentalist, was compelled to retrieve the fallen limbs from the scorched earth. As a requiem for the permanent loss of forests to the urban environment, these sensitive works acknowledge the unstoppable evolution of nature and challenge our perception of the real/reconfigured environment.

Also on view are several bronze sculptures from Korman’s “Magma” series, which celebrate the geology and evolution of the earth. These powerful abstract works refer to the eruption of molten material from the earth’s core onto the earth’s surface.