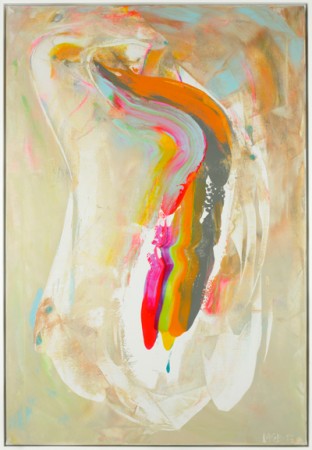 Madelyn Jordon Fine Art is pleased to announce BODY ELECTRIC, an exhibition of paintings and works on paper by Marit Geraldine Bostad, Liz Tran, and Gary Komarin. This exhibition will run from August 10 - September 16, 2017, with an opening reception on Thursday, August 17th from 6:00-8:00 p.m.
This exhibition introduces two new artists to the gallery, Marit Geraldine Bostad and Liz Tran, who come to MJFA from opposite ends of the globe--Marit Bostad, from Norway, and Liz Tran from Seattle.  Also included in the exhibition is a selection of new CAKE paintings by renowned American artist, Gary Komarin.  While diverse in methodology, technique and intent, the three artists share a passion for a vibrant, high key color palette which imparts an electrical, celebratory energy to their work.  With range and depth, BODY ELECTRIC makes clear how these individual artists are advancing contemporary art practice through time-honored modes of artmaking.
Marit Geraldine Bostad works and lives in Horten, Norway.  Educated as an Art Director, Bostad spent 10 years on visual projects in film, illustration, and concept building in Oslo, before leaving her career to pursue painting full time in 2010.  In 2015 Marit opened her own gallery/studio called Geraldine, and has exhibited her work since 2011 in London, Oslo, and New York, receiving substantial recognition from curators as well as galleries and collectors throughout Europe. Bostad describes her practice "as a kind of therapy and a way for her mind to switch off."  Her abstract paintings are influenced by memories and people, whose essence she intuitively attempts to preserve on the canvas. Richly colored and textured, incorporating layer upon layer of acrylic paint, the canvases are imbued with a fresh, youthful approach, positivity, and invigorating color palette.
Liz Tran resides in Seattle, WA. Since graduating in Print Art and Painting from Cornish College of the Arts in 2002, Tran has developed a singular visual language based upon diverse influences, including dream imagery, imagined landscapes, geodes, outer space and The Big Bang. The artist’s body of work is an attempt to counteract the darkness in the world with optimism and joy. Tran states “personal psychology is the impetus to the majority of my work. I am motivated by emotions – processing and projecting feelings through painting.”  The featured “Party” paintings are festooned with bold neon colored bubbles, streamers, splatters, and elongated drips. Composed of ink, acrylic, graphite, Japanese paper, and beeswax, the kaleidoscopic motifs seem to pulsate and vibrate across the canvas, creating a vivacious, active surface. In aesthetic terms, Tran’s phantasmagoric visual style incorporates components from 1960’s Psychedelic Art and Pop Art.
Public collections of Tran’s work include the City of Seattle's Portable Works Collection, Capital One, Vulcan Inc., Baer Art Center, Camac Art Centre, The El Paso Children’s Hospital, Harborview Medical Center, The King County Public Art Collection and The Child Center. Tran has completed multiple special projects and installations, including work for VH1 Save the Music Foundation, The Upstream Music Fest, The Seattle Art Museum, The Brain Project Toronto, Public Art at The Aqua Art Fair Miami and Vulcan Inc. She has been awarded multiple fellowships and grants; including a Grant for Artist Projects (GAP) from Artist Trust, Clowes Fellowship for residency at the Vermont Studio Center, the Nellie Cornish Scholarship and residency at The Camac Art Centre in France, The Baer Art Center in Iceland, Jentel, Millay Colony for the Arts and The Center for Contemporary Printmaking.
Gary Komarin is known internationally for his bold and colorful style of painting most associated with post-painterly abstraction. His artwork lives on the border between image and abstraction incorporating a child-like visual vocabulary. According to Komarin, the best paintings "paint themselves." Using a fusion of house and oil paint, spackle, and other assorted mediums on rough paper bags and envelopes, Komarin's beguiling Cake paintings are placed front and center. Sometimes they lean like the Tower of Pisa, while dripped frosting showcases Komarin's playful manner and charm. Komarin credits his mother's cake baking, as well as his father's career as an architect, as the genesis for this imagery, which has been described as "a marriage between the domestic and the architectural."
Born and raised in New York City, Gary Komarin attended Albany State University and Boston University, where he studied with the abstract expressionist painter Philip Guston in the late 1970's.  In 1996, Komarin was included in a pivotal exhibition at 41 Greene Street, New York, NY where his work was shown with the paintings of Jean-Michel Basquiat, Philip Guston and Bill Traylor. In 2008, he had a solo museum exhibition at the Musee Kiyoharu Shirakaba in Japan. Komarin has been shown throughout the United States, in many noted museums, corporate and public collections including the Museum of Fine Arts, Houston; the Denver Art Museum, the Museum South Texas, Corpus Christi; the Montclair Air Museum and the Zimmerli Museum, both in New Jersey; and the Arkansas Museum of Contemporary Art.  He has been honored with the Joan Mitchell Prize in Painting, The New York Foundation for the Arts Grant in Painting, the Edward Albee Foundation Fellowship and many others.