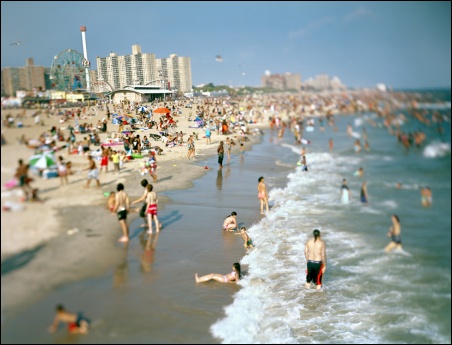 By the Sea features work informed by or evocative of the sea, navigating its personality, cultural role, and mystery. The sea, a double agent, is a place as gentle as it is ruthless, a place to encounter states of wonder, fear, exhilaration, and serenity. These recent yet timeless pieces of art span the globe from Coney Island to Italy to Hawaii. The exhibiting artists have all found significant inspiration from the sea, whether to serve as a backdrop in their work or a more central role as its subject matter. This selection of work is poetic, exploratory and perceptive, challenging the viewer to reconsider his or her own relationship with the sea.

Wayne Levin investigates a mysterious underwater world that is both haunting and tranquil and manages to catch glimpses of things many of us never see. His black and white treatment completely removes the stereotypes that plague underwater photography, allowing his work to have an exposed and honest quality with a visual rhythm.

Susan Wides and Harvey Stein hauled their lenses and equipment to Coney Island – Derek Buckner, his brushes and oil paint – the iconic place in New York where the sea comes to life.

When Wides found herself there, New York’s once neglected, manmade peninsula, known for its decaying amusement parks, found itself in a state of revitalization as Mayor Michael Bloomberg looked to attract the bid for the 2012 Olympics. Intrigued by the area for its prominent place in the history of photography – mid-century photographers such as Leon Levinstein, Garry Winogrand and Weegee spent many summers capturing the iconic area – and for its particular sense of place, Wides explores the duality of nature and culture of Coney Island. Between the public bathing rituals, the crowds, the performances, she finds it irresistible.

Stein’s compelling black and white photographs capture four decades of America’s first amusement park. “Being in Coney Island is like stepping into a culture, rather than just experiencing a day’s entertainment,” Stein said. The artist takes on the role of photographer as sociologist, documenting human patterns through of lens of Coney Island at play. Idyllic in its imagery, his work frames the men, women and children who take part in this fantasyland, and creates a portal for viewers to enter into it.

Buckner paints Coney Island with a vibrant palette that lends a certain weight to his subject matter. Looking to depict archetypal representations of America, Buckner finds beauty in banal or disquiet scenes of American suburbia and vacation.

Linda Touby’s Pigeons series, an ode to Pablo Picasso’s 1957 Pigeons, transforms the tradition of painting associated with Henri Matisse, Pierre Bonnard and the south of France into contemporary abstract paintings evoking the physical pleasures of a warm climate, a gentle sea and brilliantly colored exteriors viewed from the window.

Abstract painter Eugene Healy has been lauded for his grasp of significant form – the orchestration of lines, shapes, and colors into evocative, ecstatic relationships. Healy paints simplistic shore scenes of Nantucket, Cape Cod and other summer beach towns, capturing the mood of the locale through paint, sand, and printed fabrics.