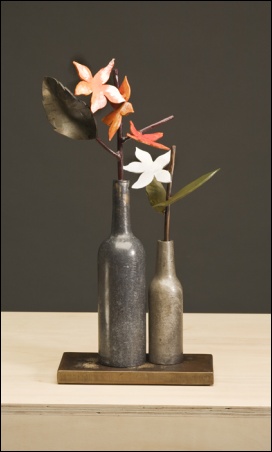 Madelyn Jordon Fine Art is pleased to present a unique exhibition of sculpture by David Kimball Anderson and works on paper by Morris Graves, entitled David Kimball Anderson & Morris Graves: A Unique Pairing from November 19, 2009 – January 9, 2010. An earlier version of this exhibition, featuring solely Anderson’s sculpture, was exhibited to great acclaim in 2007 at the Salt Lake Art Center, UT, later traveling to Spur Projects, CA and to Linda Durham Contemporary Art, in Santa Fe, NM. Here, Anderson’s sculptures are exhibited alongside Graves’s paintings. An opening reception will be held Thursday, November 19, 2009 from 6-8PM. The artist will be present and the public is invited. Previews and private showings are by appointment only.

Anderson’s pieces have a very specific and studied relationship to Graves’s paintings, down to a shared scale of the bottles and vases pictured. In keeping with his minimalist approach however, Anderson pares Graves’s arrangements to their bare essentials, most notably seen in his floral treatment. As in the Japanese art of Ikebana, Japanese flower arranging, Anderson often depicts arching stems, branches and leaves, as well as the flower itself. While Graves achieved a lightness through his flower handling, Anderson too attains this quality through the reduction of competing elements. Graves’ familiar round and squared vases often anchor Anderson’s sculptures, and are only sometimes graced with a metal stem or branch.

Regarding his later still lifes, Graves said, “I have stopped saying anything about anything; there is no statement or message other than the presence of flowers and light.” His vibrant, translucent flowers are painted with dark tonal washes that envelop the background and tabletops of his paintings. Light dances on Graves’s canvases - from his porcelain vases that seemingly reflect light as a result of the artist’s color choices to his glass vases that absorb the coloration of the surface washes. As art critic John Yau noted, “The luster of porcelain and the transparency of glass underscore the artist’s (Graves’s) interest in the passage of light and color…” In response, Anderson skillfully achieves this coloration through the application of the surface treatment, or patina, to his bronze and steel vases, while splashing his flowers and berries in orange, white, and blue. He has also harnessed qualities inherent with working in sculpture, namely the interplay with surrounding light – bouncing off surfaces and casting shadows.

This series of work is a wedding of Anderson’s and Graves’s aesthetics. The exhibition offers the opportunity to experience both artists directly and explore their similarities - fundamental parallels between the two artists - and differences. Anderson invites us to visit a space that was once two dimensional and experience it anew.

David Kimball Anderson attended the San Francisco Art Institute where he sculpted under the tutelage of James Reineking and Bruce Nauman. Anderson is the recipient of National Endowment for the Arts Individual awards, a Pollack-Krasner Foundation Grant, and a John Michael Kohler Art Center Residency Grant, Foundry. The artist has been exhibited widely, including “The Whitney Biennial” at The Whitney Museum of American Art, New York in 1975 and Lemmons Contemporary in Chelsea in 2003. His works are included in numerous public collections including the Museum of Fine Arts in Santa Fe, the San Francisco Museum of Modern Art, The Albuquerque Museum, and The Oakland Museum. Anderson has also been featured in several national publications including Art in America and The New York Times.

Morris Graves began receiving a subsidy from the government's Works Progress Administration project that gave artists a small income in exchange for producing artwork. Graves’s national reputation began with the Museum of Modern Art’s exhibition “Americans 1941 – 18 Artists from 9 States.” In 1946 Graves was granted a Guggenheim Fellowship to enter U.S. Army occupied Japan and work with Japanese artists; but, was unable to proceed to Japan. His works are in public collections such as the Tait Britain in London, Portland Art Museum, San Francisco Museum of Modern Art, and Smithsonian American Art Museum.