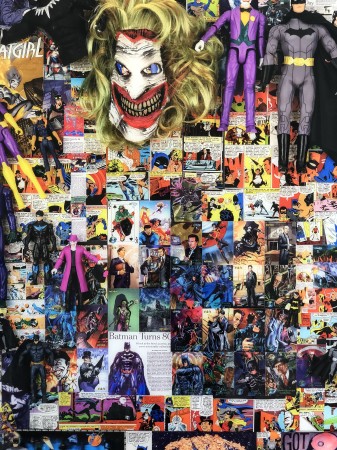 “Superman, Batman, and the American Way”

Madelyn Jordon Fine Art is thrilled to present Superman, Batman, and the American Way a 10-year retrospective dedicated to artist DJ Leon, from November 6th through December 19th, 2020. The exhibition will explore the remarkable trajectory of the self-taught artist whose complex, thought-provoking compositions explore our national love for superheroes and American cultural icons. The official opening is on Saturday, November 7th, 2020 from 12:00 pm - 6:00 pm.

Superman, Batman, and the America Way will survey the 10-year evolution of DJ Leon’s work since retiring from Wall Street in 2009 and transitioning to a second career as an artist.  Included in the exhibition will be 15-20 works representing the various mediums in which Leon works – photography, collage, lenticular prints, and 3D digital prints. This series of intricately crafted collaged photographs by DJ Leon dissects and reexamines American Culture by appropriating, curating, and combining hundreds of found images collected from the internet with text, proprietary images, and commercial memorabilia.  Focusing on multigenerational symbolic icons such as Batman and Superman, Leon offers an exploration into our national nostalgia, the phenomenon of personal experience, and the translation of memory into image.  Each thematic work contains interlacing aphorisms, cultural adages, and disjointed phrases, creating a new narrative that allows for humorous and revealing reflections on ourselves and society.

“I believe my art is summed up by what the great musician Sly and the Family Stone wrote in the song---'It’s all about everyday people,” said Leon. “Collage themes are originated inside my head primarily with things I think people enjoy talking about, things that create controversy, and things that are meaningful to me and are identified as American icons.”

The multi-sensory, interactive experience of Leon’s practice is heightened in the Lenticular and 3-D works, which create composite, animated images, made by the superimposition of lenticular screens.  Lenticular images move as the spectator shifts his position, creating an illusion of movement.  The lenticular technology activates Leon’s fluid, unexpected image bank, engaging the viewer in the production of meaning of the piece.

Born in 1948, DJ Leon graduated from Boston University and spent 38 years on Wall Street before devoting his time exclusively to the photo-based practice in 2009.  Although not formally trained, Leon is a longtime avid photography enthusiast and art collector.  Over the past decade, his artistic practice developed into multiple forms, from making images with a camera, to combining images into collages, and then altering them into 3D and Lenticular prints. Since 2012, Leon has exhibited his work throughout the United States as well as internationally.  Recent exhibitions have included American Embassy, Ankara, Turkey, Madelyn Jordon Fine Art, Scarsdale, NY, Lawrence Cantor Gallery, Los Angeles, Scope Art Fair, Miami, and New York.  His work is included in the Superman Museum, in Metropolis, Illinois, as well as in private and corporate collections across the United States. Leon’s beach and lifestyle photography, a separate and distinct body of work, has also gained significant recognition and has been exhibited nationally including at Surf Lodge, Montauk, and Market Art Fair, Bridgehampton.

The exhibition will be accompanied by an online viewing room and a fully illustrated catalogue.