Ernesto Gutierrez: In the Valley of the Incas 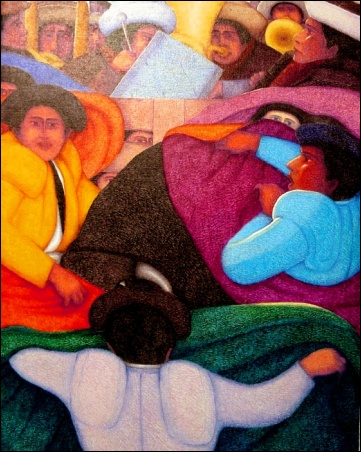 ERNESTO GUTIERREZ – “In the Valley of the Incas”

Madelyn Jordon Fine Art is delighted to present “In the Valley of the Incas”, a solo exhibition of work by accomplished South American painter, Ernesto Gutierrez. The exhibit shall run from July 30 - September 5, 2009. A reception will be held on Thursday, July 30, 2009 from 3-5 p.m. Previews and private showings are by appointment only.

Gutierrez was born in Lima, Peru in 1939, his father a Spaniard, and his mother a Quechua Indian. After receiving a BFA in Lima, Peru in 1964, Gutierrez studied at the Museum of Modern Art in Rio de Janeiro, Brazil. In 1971, he was awarded a Fulbright Scholarship and studied at the University of Wisconsin, earning an MFA in 1976. Since that time, and until recent years, the artist resided in the United States, establishing a reputation for singular paintings marrying his Indian heritage and Western education.

In the current exhibition of oil paintings, the artist depicts scenes of daily life, customs, joyous celebrations, and folklore of the indigenous people of Peru – including landscapes, bullfights, women at work, with children, and musicians playing instruments. The rich and dense imagery, punctuated with the textiles, produce, and ceramics of Indian life, could be snapshots from the past or present. Dating back to Inca times, life in rural Peru has been organized around the extended family. This has contributed to maintaining the traditional practices of their ancestors, including a hardscrabble livelihood based on farming family-owned fields and weaving textiles. Their simple dignity is brought to life.

Stylistically, the canvases are built with structured blocks of interlocking simplified cubist-realist forms and volumes, inspired by French masters Cezanne, Gauguin, and Matisse, as well as Rembrandt and Botero. The artist depicts monumental human forms dressed in patterned costumes of intense color. His use of bold colors – shocking pink, chartreuse, mauve, orange, maize, and a whole range of blues, purples, and greens - contrasted with white and black, serves to heighten the dramatic effect. “The most popular part of a painting is the color, and then the subject” notes Gutierrez. His signature technique, the making of parallel strokes with the point of his brush, adds texture and a beautiful reflective quality to his canvases.

The artist is a noted historian of Pre-Columbian culture, writer, and illustrator having received several awards for his printmaking. His paintings hang in the National Statehouse in Lima, as well as numerous public and private collections.