EUGENE HEALY: STEADY AS SHE GOES 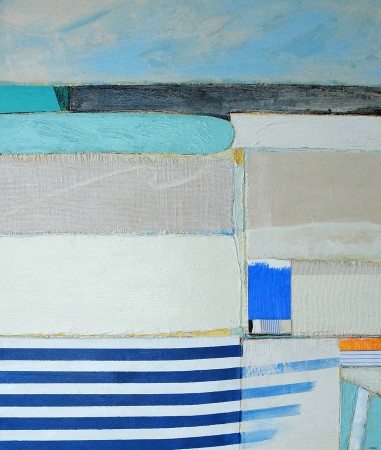 Madelyn Jordon Fine Art is delighted to announce STEADY AS SHE GOES, a solo exhibition of recent paintings by American artist EUGENE HEALY. This exhibition will be on view from May 17 - June 29, 2019. There will be an opening reception on Friday, May 17th from 6:00 - 8:00 p.m. and the artist will be present. The public is welcome.

The exhibition shall include 19 recent works, on panel, canvas and paper. Inspired by such painters as Matisse, Vermeer, Richard Diebenkorn, Robert Rauschenberg, Hans Hoffman, and the Fauve painters, Eugene Healy is an abstract artist principally recognized for his color drenched, collage-paintings of shore scenes of the Eastern United States, especially the beach towns of Connecticut and Rhode Island, where Healy has resided for over 25 years. His intense study of the contrasts in the light and color of these locales has formed deep impressions in the artist, and it is these impressions Healy so effectively materializes by employing a variety of mediums ranging from oil, watercolor, encaustic, oil crayon, lacquers, and colored pencil applied to fragments of canvas, boards, and paper.

Creating a sense of place in his paintings, Healy's minimalist seascapes are inspired by the forms and myriad tones of blues, yellows, and greens that he sees in his coastal surroundings. Using collage, gluing scraps of painted mesh, canvas as well as other fabric over one another, the resulting work is an abstraction - a beautifully composed and balanced series of flat shapes executed with subtle and sophisticated layers of colors. Through overlapping and using cut seams, the divided surfaces and diagonal intrusions interrupt the flatness adding texture and depth to the surface.

Healy's strong sense of composition, seductive colors and surfaces, and exquisite symmetry between planes lend his paintings a harmonic quality. Yet what is generally not known about the artist is that to create this precarious balance, he returns to each work, over and over, almost obsessively making changes. Each work has its own very special musicality. It is something more than just a time or a place but rather it's an orchestration of lines and shapes constructed into particular combinations and relationships so that the completed work evokes a rhythmic spirit of calmness and serenity.

Healy's collages often possess an airy sensibility, the appearance of a seascape observed from near or a considerable distance. Other works appear to focus on a snippet of a scene. In doing this, the artist reconciles his perception of the natural environment with his conception of the resulting work; observing the structure and order both in nature and on the canvas. As stated by the artist "I am an abstract painter. However, I don't stray far from objective reality when I try to evoke a sense of place in my work. My paintings are often subjective interpretations of different areas along the New England shoreline."

Eugene Healy was born in 1948 and grew up in Brooklyn, New York. He studied painting at the New York Institute of Technology and earned his B.F.A. in 1972. Healy has served as Curator and Director of the National Artists' Alliance and as Exhibition Designer for the Yale Center for British Art. Healy has exhibited his paintings continually for the past 25 years throughout New England. Jack Welch, the legendary former CEO of General Electric, is among the most enthusiastic collectors of Healy's work.