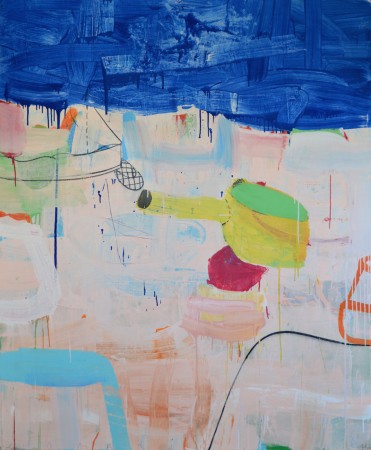 Madelyn Jordon Fine Art is pleased to present GARY  KOMARIN, Paintings and Works on Paper, Connecticut artist Gary Komarin’s first solo exhibition at Madelyn Jordon Fine Art, from May 8 – June 20, 2015.  The exhibition will include recent paintings on canvas and works on paper. There will be a whimsical grid installation of the artist’s signature French Wigs, as well as his iconic Cakes, and Vessels. Private showings are by appointment.

Gary Komarin has been exhibiting his works for over 30 years.  Known internationally for his unique style of painting that owes allegiance to abstract expressionism and color field genres, his canvases live on the border between image and abstraction.  Intuitive gestures form the background of his boldly colored canvases, balanced, or unbalanced with an amalgam of scrawled, spontaneous drawing, drips and cartoonish, child-like forms.  The forms—hats, bottles, pails— sometimes recognizable, sometimes not, are reminiscent of Martin Puryear’s sculptures—so familiar, they resist recognition.

The chaotic surfaces of Komarin’s pieces create a vitality and tension between the spontaneous and the considered, the accidental and the consciously executed.  It is the natural result of the artist’s process based on his belief that intention and control should be totally removed from the act of painting.  According to Komarin, the best paintings “paint themselves”.  Using a fusion of house and oil paint, spackle, and other assorted mediums, Komarin loses himself in the act of painting, free and confident, seeking the serendipitous interaction of the conscious and unconscious.

His works are not all inherently abstract, either.  In his delightful, naively drawn Cakes (painted on rough paper bags), and The French Wigs (painted on canvas), Komarin places the image front and center, akin to Joe Bradley’s “Superman”.  The simplistic, yet beguiling Cakes sometimes lean like the Tower of Pisa, while dripped frosting showcases Komarin’s playful manner and charm.  According to the artist, the Cakes are a marriage between the domestic and the architectural.  He credits his mother’s cake baking, as well as his father’s career as an architect, as the genesis for this image.

While steeped in 20th century abstract philosophy, Komarin’s works also connect to a new type of abstraction, described as “provisional painting”, by Raphael Rubinstein, in Art in America, and “The New Casualists” by Sharon Butler, in Two Coats of Paint.   The central idea describes “a calculated tentativeness”, “a concern with multiple forms of imperfection”, [focusing on] “the off kilter, the overtly off hand...”   Like Komarin, they seek to get back to the process of painting itself, favoring playful, unpredictable encounters.  It is obvious that this current trend is aligned with Komarin’s artistic sensibility.

Born and raised in New York City, Komarin attended Albany State University, and went to graduate school at Boston University, where he studied with the abstract expressionist painter Philip Guston in the 1970’s.  Guston became a mentor to the young artist.   Komarin recalls, “Guston made painting seem like a door to the unknown—a way to explore yourself, the world, the human condition.  He wanted you to paint what you don’t know rather than what you know. “

The artist has exhibited extensively throughout the United States, the United Kingdom, Europe and Asia.  In 2008 he had a solo museum exhibition at the Musee Kiyoharu Shirakaba in Japan.  In 1996 Komarin’s work was included in a pivotal exhibition at 41 Greene Street, New York, NY where his work was shown with the paintings of Jean-Michel Basquiat, Philip Guston and Bill Traylor.

He has been honored with the Joan Mitchell Prize in Painting, The New York Foundation for the Arts Grant in Painting, the Edward Albee Foundation Fellowship and many others.  His work has been reviewed in The New York Times, Art in America and Arts Magazine, and can be found in many public collections including The Museum of Fine Arts, Houston; The Yoshii Foundation, Tokyo; The Montclair Art Museum, and The Boston University Museum of Fine Art.