GARY KOMARIN: THE VICOMTE AND SOME OF HIS PARTS 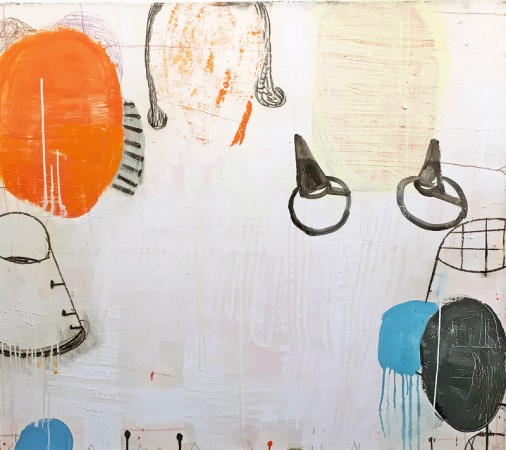 CATALOG: The Vicomte and Some of His Parts
PRESS: Fine-tuned Fine Artist Returns for Solo Showcase
PRESS: Art News (Oct. 2018)

MJFA is delighted to announce a second solo exhibition of paintings and works on paper by American artist GARY KOMARIN. The exhibition, entitled THE VICOMTE AND SOME OF HIS PARTS, will be on view from September 6 - October 20, 2018. There will be an opening reception on Thursday, September 6th from 6:00 - 8:00 p.m. and the artist will be present.  The public is invited.

Included in the exhibition are seven oil paintings and four works on paper all completed in the past year. Komarin is internationally recognized as a risk taker of contemporary painterly abstraction. An artist who has forged a singular style over 30 years of painting, Komarin’s free-wheeling works have a deep connection to Color Field and Ab-Ex painting, and the current trend of Provisional painting. Utilizing unconventional materials, such as house paint, spackle, and industrial canvas tarps, Komarin’s roughly textured, intuitive paintings feature an assortment of oddly shaped forms and iconography – that may or may not appear recognizable – on large flat fields of solid color. He states “I think of my paintings as pre-linguistic. Forms travel and co-mingle through time and space, free from the tyranny of order and reason.”

Komarin has long been associated with the 20th abstract painter Philip Guston, with whom Komarin studied and was mentored at Boston University in the 1970’s. The artist, who was awarded a Graduate Teaching Fellowship, took to heart Guston’s philosophy of “painting what you don’t know.” As stated by New York Times art critic, Barry Schwabsky “Guston’s lesson in cultivating the unknown and the teacher’s peculiar sense of form can also be traced in his former student’s work.”

Gary Komarin’s large-scale paintings hover in a kind of dream-like metaphysics.  When beginning a new work, the artist starts with mark making the canvas with a crayon, pencil, or charcoal, as a way to liberate and open up the canvas.  He then pours a variety of paints, overlaying one contrasting patchwork of color over another, and responding instinctually to whatever is being poured or moved around. With no thought or intention, the canvas starts to have a voice as he marries color with drawing. Whimsical, half-formed objects are inserted throughout his compositions, sometimes upside down or half seen at the edge of the canvas. The resultant image is one that appears familiar but resists recognition, akin to a child’s fantastical drawing. The expansive space between the ambiguous motifs is as equally important, allowing the eye to move seamlessly from one amorphous shape to another.

Wigs and Cakes are among Komarin’s most recognizable idiosyncratic images, often turning up in his paintings. The painting Still Life with the French Wig feature three faceless characters donning wigs of braids and tangled tresses. As stated by the artist, the idea of the wig is to cover up, accentuate, and/or adorn and these qualities relate closely to his process of making a painting.  Similarly, in new works on paper, Komarin presents a single oddly shaped cake in an opposing field of color—as homage to his mother, a Viennese baker of less than perfect, but love infused cakes throughout his youth.

As a literature major in college, Komarin’s love of words are evident in his painting titles. Taking poetic license, they are meant to spark imagination and rarely explain the work. The Ballad of Leandro and Luz, The Disappointed Mistress No. 9, and Swiss Positions are a few of the enigmatic titles that appeal to Komarin simply for its phonetics and lilt.

At first view, Komarin’s paintings are not easy to digest as there is no single narrative or underlying message, except for the process of painting. But with each examination, the visceral desire for understanding is triggered and one cannot simply walk away.

Born and raised in New York City, Gary Komarin attended Albany State University and Boston University. In 1996, Komarin was included in a pivotal exhibition at 41 Greene Street, New York, NY where his work was shown with the paintings of Jean-Michel Basquiat, Philip Guston and Bill Traylor. In 2008, he had a solo museum exhibition at the Musee Kiyoharu Shirakaba in Japan. Komarin has been shown throughout the United States and abroad, and his work is included in many noted museums including the Museum of Modern Art, San Francisco; Museum of Fine Arts, Houston; The Menil Collection, Houston; the Denver Art Museum, the Museum South Texas, Corpus Christi; the Montclair Air Museum and the Zimmerli Museum, both in New Jersey; Museo de Arte Moderno de Bogotá, Columbia; and the Galleria Nazionale d’Arte Moderna e Contemporanea, Rome, Italy.