HUNT SLONEM: A MENAGERIE OF WONDERS 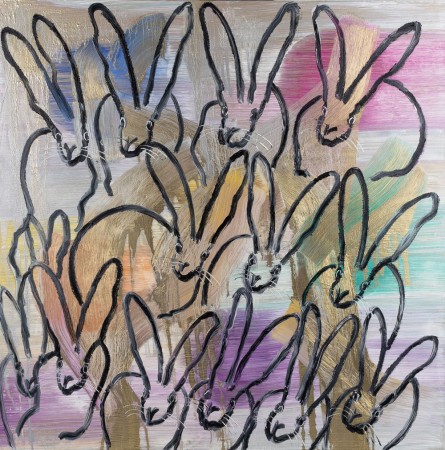 CATALOG: A Menagerie of Wonders

Madelyn Jordon Fine Art is delighted to present A MENAGERIE OF WONDERS, a solo exhibition of new paintings by HUNT SLONEM. The exhibition will run from October 25 - January 11, 2020, with an opening reception and book signing on Tuesday, October 29, 2019 from 6:00-8:00 p.m. This is Slonem’s second solo exhibition with the gallery and the public is welcome to attend and meet the artist.

A MENAGERIE OF WONDERS will debut 15 of Hunt Slonem’s newest paintings on subjects for which he is best known - bunnies, butterflies, and tropical birds. As an artist who has fashioned a distinctive, neo-expressionist style over a stellar 40-year career, Slonem continues to evolve his artistic practice, keeping his work fresh and on trend, while remaining true to his artistic roots. Depicting his signature motifs of repeating whimsical animal imagery and fauna, Slonem’s ongoing experimentation with unconventional methodologies and materials, such as diamond dust and resin, provide the perfect conduit to express his artistic vision as an abstract painter of living things in nature. As stated by Slonem “Unlike a lot of contemporary art which is political or shocking or jarring, mine is non-judgmental. I’m exhilarated by nature, including birds, plants and butterfly forms that most people don’t even know exist.” Additionally, included in this exhibition, the gallery will feature an acrylic and aluminum ‘bunnies’ sculpture for the first time.

Slonem’s work is deeply rooted in the act of painting. His practice of layering thick heavy paint over paint that bleeds into each other with a singular technique of cross-hatching, conveys a sense of movement and verve to the painting. For Slonem, his cross-hatching technique creates "a feeling of tapestry, it's like weaving. I'm making colors bleed into each other. I'm revealing the under-painting. I'm making these marks to allow the light to come through, basically. So, you're seeing about five levels of paint, instead of one.” The multiple, repetitive figures reflect his desire to explore spatial complexity, compression, and density where there is no clear beginning or end. One of the great colorists of his time, Slonem’s idiosyncratic works feature a buoyant and vivid, fauvist palette. Through the application of lavish, lush colors, Slonem’s painterly style continues to be fresh and innovative bordering on Pop Art aesthetics. In each painting, the artist’s devotion to nature and its inhabitants are apparent. Deeply concerned with the environment and its preservation, Slonem’s ultimate aim is to paint uplifting and joyful works that illustrates his love for the earth--- our “Garden of Eden.”

One exhibition highlight is Slonem’s “Chinensis” paintings. These novel ‘bunny’ compositions are influenced by the hustle and bustle, 24 hours a day, irradiant lights of New York City’s Chinatown, where the artist has resided for decades. Inspired by the street lamps, window lighting and paper lanterns of the eclectic shops throughout the area, these paintings incorporate colorful orbs in purple, hot pink, turquoise, and orange that are arranged throughout the canvases. These works are reflection of contemporary urban life – always lit up, awake, and alive.

Hunt Slonem was born in Kittery, Maine in 1951. His father was a navy officer, and as a result of his father’s military career, Slonem spent much of his childhood on different military bases; living in Hawaii, Virginia, Louisiana, Connecticut, California and Washington. After completing school, which included living in Nicaragua as an exchange student at the age of 16, Slonem began his undergraduate studies at Vanderbilt University. Slonem attended the prestigious Skowhegan School of Painting and Sculpture, Skowhegan, ME, in 1972, before moving to Tulane University of Louisiana, New Orleans, LA, where he graduated with a BA in 1973.

Since 1977, Slonem has had over 250 solo exhibitions at prestigious galleries. Museums, both domestic and international, have collected his work, among them Solomon R. Guggenheim Museum, the Metropolitan Museum of Art, the Whitney Musuem of Art, the Miro Foundation, and the New Orleans Museum of Art.