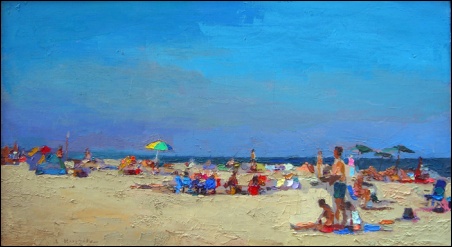 Madelyn Jordon Fine Art is delighted to present an exhibition of recent works by two artists, Larry Horowitz and Ted Larsen, entitled “Larry Horowitz & Ted Larsen: Recent Paintings and Sculptures” from May 20 – July 10, 2010. The exhibition marks the second for Westchester based painter, Larry Horowitz, and the fifth for Santa Fe based sculptor, Ted Larsen, at the gallery. Private showings are by appointment only.

The exhibition displays an inspired pairing of two exceptional artists in mid-career. New York artist Larry Horowitz, a respected landscape painter working in the Plein Air tradition, travels extensively throughout America. His favorite locations, the picturesque harbors and summer beaches of the New England coastline and the dense forests and farms of the Hudson Valley are fuel for his work. Horowitz’s paintings are intimate depictions of color and light reflected through the atmosphere at different times of day and seasons, from clear skies to inclement weather. His paintings are alluring and tend to elicit a range of emotions in the viewer.

Horowitz’s works reflect a careful attention to traditional methods and materials. While his works reflect a respect for the Hudson River School painters in his signature application of paint – thickly painted impasto, palette knife carved surfaces, Horowitz’s colors are contemporary. Stylistically, his land and seascapes bridge the divide between representation and near abstraction.


Santa Fe artist Ted Larsen, formally a landscape painter, presents a series of box works reflecting his continuing practice of transforming salvaged metal into individualistic sculpture. His meticulously rendered, patterned constructions, outwardly reminiscent of minimalist painting, are a unique blend of pure aesthetics and historical subtext. Both metaphorical and non-objective, the artist does not intend to symbolize or represent an outside reality, allowing the viewer to make their own connections.

The choice of color, plane of color, line, texture, and material are principal in Larsen's work. The artist is continually in pursuit of non-traditional materials, re-claiming discarded aluminum and steel from cars, road signage, architectural elements, and industrial machinery. The metal fragments are in themselves ready-made, contributing their own physical attributes and history. Larsen uses steel, ink, and graphite in these constructions, finishing the surface with either resin or bee’s wax. Employing a variety of labor-intensive processes - deconstructing, cutting, distressing, painting, and piecing together - his fabricated constructions come together as objects reinvented. The result is a collection of enchanting metal-clad jewel boxes.

Larsen was granted the 2009 Edward Albee Foundation Residency Fellowship and was honored with a grant in 2008 from The Pollock Krasner Foundation. He has exhibited in over thirty gallery and museum venues across the country. His work is included in the New Mexico Museum of Art, the Krasel Art Center, St. Joseph, Michigan; and in many corporate and private collections including American Honda Motor Co., Inc., NBC, Capital One, Prudential Securities, Reader's Digest, United Artists, Proctor & Gamble, Forbes, Inc., PepsiCo, University of Miami, JP Morgan Chase, United Airlines, and Dreyfus Funds.

The highly individual art practice of each artist complements the other, and represents a sample of the range of works shown by the gallery.