Stephen Dinsmore: In My Mind's Eye 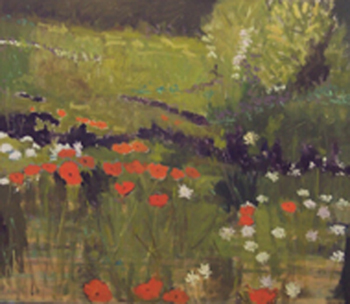 Madelyn Jordon Fine Art is pleased to present its first solo exhibition of works by contemporary painter Stephen Dinsmore, entitled Stephen Dinsmore: “In my mind’s eye”. The show will run from October 26 – Dec 1, 2007. An opening reception for the artist will be held on Friday, October 26, 2007 from 6:00 – 8:00 p.m. Previews and private showings are by appointment only.

Dinsmore who was born, bred and still resides in Nebraska has worked out of his studio there for more than twenty years and is widely recognized for his soft, luscious and quietly mysterious paintings of still life, landscapes, interiors and florals. Summer 2007 produced a significant change in his repertoire as he ventured to Maine to expand his vistas. The recent works contain new and unique subject matter whether it is landscapes, interior scenes or floral still life.

Mystery and enchantment pervade Dinsmore’s work. “I try to make a painting that has in it at least something of the magic and mystery of the thing; the alchemy; the thing that excites," says the artist. The artist synthesizes his imagery from imagined, remembered, and felt responses. His work is concerned with light and sensual blends of color, conveying subjective feelings above objective observations. The paintings aim to reflect the artist’s state of mind rather than the reality of the external world.

Dinsmore, whose first love is abstract art, creates paintings which are concrete in detail and abstract as a whole. His flat shapes with unfinished edges and fluid lines interlace with subtle balances of color and light. He draws the viewer into a space and elicits a question as to what lies beyond the window or open door.

The artist draws inspiration from artists like Henri Matisse and Richard Diebenkorn, as seen in his expressive language of color, uncommon perspective and loose gestural style. Through painting, the artist attempts to convey an inward response to nature and a reverence for the natural world.
Dinsmore aims to produce paintings that provide pleasure and create emotional exaltation. Says the artist, “It is important that the finished painting have a visual ‘lastingness’ such that the work continues to resonate over time."

That the artist has achieved success in these pursuits is obvious. His work has been exhibited nationally for over 15 years, and is in the collection of the Museum of Nebraska Art, Kearney, NE, the American Embassy, Paris, France, and a multitude of national and international corporations including Hilton Hotels International, United Airlines, Inc., Osaka, Japan and Frankfurt, Germany, General Electric Corporation, New York, NY. He is also included in many private collections nationally and internationally.