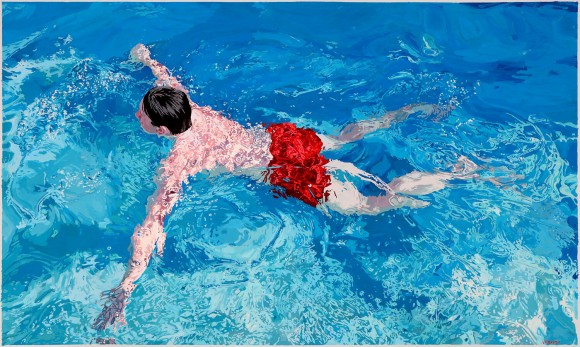 Summer has arrived at MJFA, and it has been a surreal one so far! We are welcoming the season with a group exhibition featuring new work by a selection of 9 contemporary artists.  While Surrealist principles directly influence the practice of Gary Komarin and Deborah Buck, the group, as a whole, are similarly inspired  in their expressive and intuitive artworks that capture the psyche of the summer season.

Deborah Buck works in pastels, acrylic paint, and other materials to explore the chemistry between surrealism and abstraction. Her sense of humor, absurdity, and childlike fascination with the darker side of fairy tales lend a strong narrative sense to her practice.

Ron Ehrlich scrapes, scratches, and drips paint on the canvas’s surface and even uses a blowtorch to fuse colors and forms, all of which achieves the idea that the “skin” of the painting is like the fired surface of a ceramic object that reveals the remarkable layers of these expressive non-objective paintings. The meditative calm in his art speaks to his extended studies in Japan.

Born and raised in north central Minnesota, Samantha French’s work explores the idea of escape, the tranquility and nostalgia for the lazy summer days of her childhood. The series is inspired by French’s own reflections and memories of her childhood summers spent in the lakes of Northern Minnesota.

Eugene Healy meticulous collage paintings are abstractions of beach and shore scenes of New England, places that have evoked particular moods and feelings in him. His mediums range from oil, watercolor, encaustic, oil crayon, lacquers, colored pencil applied to fragments of canvas, boards, and paper.

Utilizing unconventional materials, such as house paint, spackle, and industrial canvas tarps, Gary Komarin’s abstract, intuitive paintings feature an assortment of oddly shaped forms and iconography – that may or may not appear recognizable – on large flat fields of solid color.  His paintings display a vitality and tension between the spontaneous and the considered, the accidental and the consciously executed.  It is the natural result of his process based on his belief that intention and control should be totally removed from the act of painting.

Finding inspiration in pattern and texture, Kate Roebuck’s organic linework and neutral color palette offer works with an unconventional yet rhythmic balance of playfulness and precision, adding a contemporary and youthful identity to her forms. Roebuck primarily works with sumi ink and watercolor on handmade paper. She loves the textile quality of paper over canvas, and often toys with the boundary separating art and life, while remaining expressive and accessible.

Scarsdale artist, Roohi Saleem’s abstracted narratives on canvas are animated by her innate sensitivity and concern for human conditions and emotions. Her work is inspired by a constant search for tranquility, as she views painting as a form of 'emotional survival'. Throughout her career, Saleem has experimented with both acrylic and oil paints, ultimately landing on oil sticks. Growing up in Karachi, Pakistan- as well as living in Dubai, Muscat, and Los Angeles- has greatly impacted her work, most noticeably through her use of calming colors.

Tom Wesselmann is considered a major figure of New York Pop art. He rejected the principles of Abstract Expressionism and made bold paintings and inventive sculptures—both cut-metal works and assemblages—which riff on pop culture and art historical compositions. Women were a constant source of inspiration: Wesselmann’s most famous series, “Great American Nude” (1961–73), channels the brazen energy of American advertising and features flat, faceless female figures whom the artist often situated among stars and stripes. Educated at Cooper Union and the Art Academy of Cincinnati, Wesselmann got his start selling cartoons to magazines, newspapers, and ad agencies before he found success as a fine artist. Today, he’s represented in the collections of the Art Institute of Chicago, the Whitney Museum of American Art, the Museo Thyssen-Bornemisza, and the Guggenheim Abu Dhabi, among other institutions.