Yangyang Pan: Down the Rabbit Hole 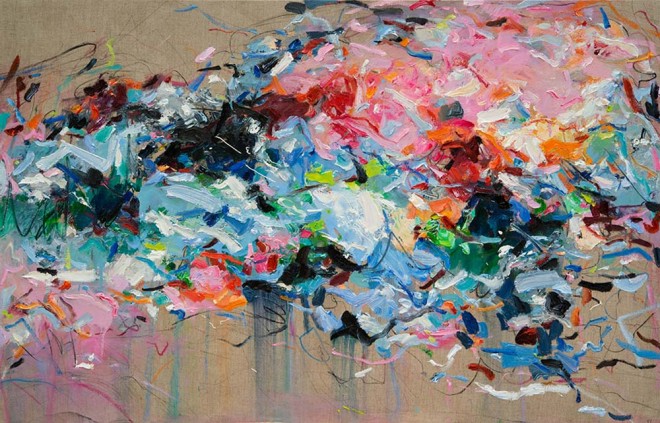 Online Catalog
Westchester Magazine
You are my fave
ARTE FUSE

On exhibit will be 11 paintings, completed in the past year, which highlight Pan’s spontaneous, lyrical approach to painting.  The exhibition title, “Down the Rabbit Hole” serves as a metaphor for Pan’s working process and personal existential journey inward in the creation of the works.  Similarly, the title refers to historical artistic sources which have influenced Pan’s celebratory style.  Both provide a foundation for Pan’s reinterpretation of action painting, fueled by youthful optimism, a cross-cultural history and outsized talent.

Like Alice in Wonderland following the March Hare down the rabbit hole, Pan jumps into her painting feet first without looking in the hole or thinking about it.  According to Pan, her paintings begin with openness-- a space to explore conceptual ideas of memory, experience and emotion.  A hands-on painter, she works intuitively, freely applying vigorous flurries of rapid brushstrokes of varying shapes and intensity.  Color patches are added or taken away, a self-imposed game explored through shapes, marks and colors, which organize the space of the canvas.  At times her canvases are packed to the rafters with linear strokes; at other times, softer dabs of energetic colors float above fields of negative space.  Canvases of raw linen, a new surface for Pan, accentuate the separation between paint and ground, evoking a sense of deep physical space.

Unlike the Abstract Expressionist artists of the mid- 20th century, who communicated the uncertainty and fear of a post World War II nuclear world, Pan’s abstract painting evokes an idealistic, optimistic, global view.

Linking Eastern and Western sensibilities, Pan's works are successful for her individualistic take on ab-ex tradition, and is emblematic of painting in the 21st century.